The history and backgrou​nd of SUNGO

SUNGO is a Not for Profit Organisation and Incorporated Society with a Constitution approved by its membership. It is a nationally registered NGO (Non Government Organisation.

The constitution of SUNGO was first registered, and an Inaugural meeting held in November 1997. The First AGM was held in October,1998, with a membership of 26 member CSO organisations. Current Membership now stands at over 200 CSOs including NGO’s, Trusts and Community Based Organisations.

The SUNGO Office was located in Motootua for many years prior to SUNGO purchasing land in Vaitele where the current base of SUNGO is located in a rapidly growing area.

SUNGOs goals and objectives are set out in the Strategic Plan reviewed every four years. The five key goals of SUNGO are based on Governance & Management, Stakeholder Relationships, Institutional Strengthening, Finances, and Policy, Advocacy and Research.

Capacity Building and Training for its members and for the community has been one of the core activities of SUNGO over the years funded through agencies such as NZAID, AUSAID, USAID and EU. Providing information for its members has been important through regular email and newsletters and now social media.

SUNGO is seen as the collective voice for civil society in Samoa so often called on to provide input into public issues, new legislation or proposals for change by government. Examples include the government decision to change from left to right hand drive on the roads and more recently proposed legislation relating land and titles.

SUNGO is also represented on a number of Government ministry Steering Committees and the organisation has worked to develop constructive relations with government while retaining its independence to speak out.

A developing area for SUNGO is research with the recent appointment of staff to undertake research on community needs or on public issues.

SUNGO is reliant on the generosity of donors to help fund both its operations and the programmes that it provides for the community. This has allowed SUNGO to appoint a competent and skilled staff to deliver its programmes.

SUNGO has also benefited over many years from support provided by SUNGO Technical Advisors based in New Zealand and Australia. 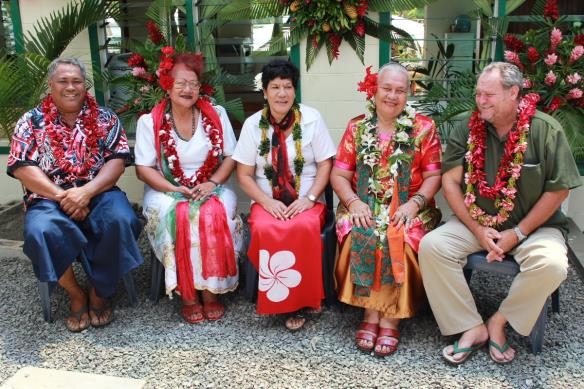 At the opening of the new SUNGO office at Vaitele 2011